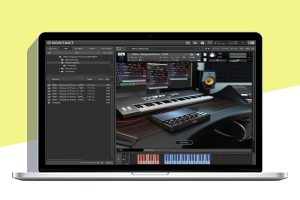 The Shepard Tones are divided into a variety of different categories. The categories include both organic and orchestrally textured Shepards and clean synth-based variations. We also created both slow, medium and fast-moving Shepard’s, so you can find exactly the one that fits the mood, texture and tempo of your composition.

8Dio Shepard Tones also contains unique rising Shepard’s that continues to rise (or fall) over a span of 6 octaves – while the Shepard continues to rise within itself. In addition, we created unique categories containing both dry and wet Shepards.

The 3D-Based User Interface is the perfect compliment to the Shepard Tones. A single click and your Shepard’s are reversed – giving the opposite effect of elements falling. Another click and the tempo-synced gate is activated – offering you the ability to BPM-sync and arpeggiate the Shepards.

8Dio Shepard Tones also contains a vast section of additional effects, including filters, filter-modulation, bit-crusher, distortion and dual convolution reverb. We custom designed a variety of new big verb impulses particular for the library, so you can add minute reverbs to the Shepards.