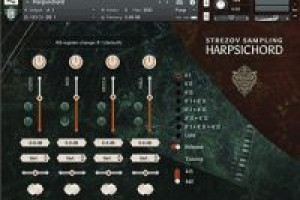 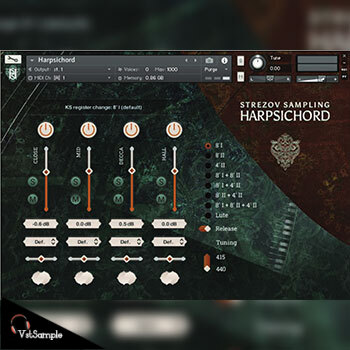 HARPSICHORD
With its full sound, charismatic and distinctive timbre the Harpsichord has been a backbone of many composers’ works ever since the Baroque era, spanning all the way up to the modern cinematic music. Driven by the desire to capture every single tone color of this amazing instrument in detail, we embarked on the journey of recording and creating an easily playable instrument, while still preserving its character and its unique “voice”.

The harpsichord was meticulously tuned and prepared by our engineers in order to give out a clear, even tone for all registers. The instrument consists of three registers, or in other words – 3 different sets of strings recorded here – two at 8 feet long and one at 4 feet long that sound an octave above the others. We’ve also captured the “buff”, also known as lute stop: soft leather pressed against the strings, for a slightly more muted tone.

We have also recorded a true combination between the three registers (8’ + 8’ + 4’) and you have the software possibility to combine them differently yourself.

Choosing different registers and parameter combinations (mic adjustments, etc) can vastly change the tone of the instrument and perceived playing space, which is perfect for any mixing situation where the harpsichord can be adjusted properly, without compromising the true sound of the instrument. All the different register combinations are also available as key switches placed close to the bottom of the keyboard, so that the register combination could be edited with a single key.

You can opt to turn the release sample set on and off with this toggle switch. There’s also a choice for you between modern tuning at 440Hz, and a more traditional baroque tuning at 415Hz. As with any other of our libraries, you have the opportunity to reset the round-robins of any instrument using the RESET RR with the keyswitch located at C1.

The content of the library was recorded in the Sofia Session Studio with a variety of microphones used in many different positions. These have later been summed up to 4 useful variations:Close, Mid, Decca and Hall.For all 4 of those, you have the option to Purge (the ON/OFF button on top of the volume slider), Solo or Mute. In addition, you can adjust the volume, the stereo width, and you can designate different outputs for each microphone position if needed.