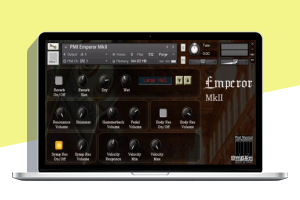 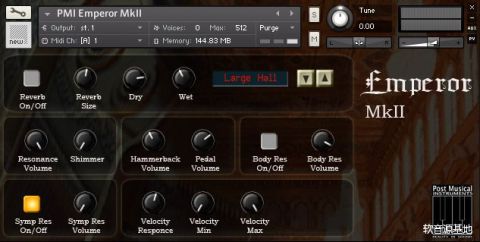 The Emperor is a reproduction of a unique Bösendorfer 290 SE Imperial Grand Piano. The owner achieved to install a very high-tech mechanism in the piano designed by Wayne Stahnke that operates the piano keys and pedals with more than 1.000 steps accuracy and is controlled by a computer system. This allowed me to capture each velocity layer of this perfect instrument with unequalled precision. By utilizing this new technology to optimize the performance of the action, we have created a product which leaves the pianist in total control of dynamic response, timbre and touch. This library provides the greatest possible control during the softest pianissimo, through crescendos to the reserves of power needed for the loudest fortissimo.

When we planned this new library we faced the next concept: As many velocity levels as possible in one easy to handle file. In order to achieve a smooth response over the whole keyboard we wanted as many velocity layers as possible. Pedal down and pedal up samples. We wanted to record the Impulse Response of a concert hall to provide real ambience with convolution reverbs. We wanted to capture the body resonance IR for use in convolution engines. Above all we needed a full bodied, consistent, well maintained instrument, with perfect regularity across the keyboard, the absolute right tuning and the highest level of maintenance. We wanted a crystal clear recording. … a highly accurate reproduction of the sound of the more distant air (where the overtones “mingle”) and vibrating wood that create much of the timbre.

Mathematician, scientist and inventor Wayne Stahnke became fascinated with the idea of designing his own reproducing piano when he visited Disneyland at the age of thirteen. “They had a player piano—and it was playing all those notes, with perfect accuracy, and amazing rapidity,” he said. “And something clicked in my brain.” It was to be an enduring fascination. After earning a degree in electrical engineering from U.C. Berkeley, and enjoying a successful career as an aerospace designer, Stahnke returned to his dream of designing and building a reproducing piano. “I wanted to build one that would record and play in a way that would satisfy the finest musicians,” he said. His technology took more than a decade to evolve into reproducing concert grand pianos.